Our Clients. Our Livelihood. Our Purpose.

Thorburn Australia have been engaged by Rio Tinto (Gove Operations) continuously since 2015 when we kicked off the H815 Conveyor Upgrade Project.

Due to the curtailment of the main plant, the site was exporting bauxite directly to ships via front end loaders and temporary dump hoppers on existing conveyor belts. The H815 project saw the re-instatement of key conveyors to allow a continuous feed from the overland system all the way to the ship. Thorburn Australia was there to provide the electrical and control system design for the new system.

Following the successful completion of this project, Thorburn Australia has been called upon to upgrade VSD’s, a Sewerage Treatment Plant and now the complete Control System Upgrade.

This latest project will last over 18 months and see 15 PLC’s replaced, controlling conveyors, stackers, reclaimers and the Shiploader.

An entire new Citect SCADA will be rolled out and a new modern system will allow optimisation and maintainability for the life of the operation.

Upgrade the entire site from Citect v7.2 to Citect 2016 by re-writing the entire application.

Connexium, Hirschmann, Cisco Network for peer to peer and IO. Profibus and Modbus to field devices.

Providing the site with a complete suite of functional specifications, drawings and documentation.

Examining each process to determine current functionality, safety and operations are best practice. 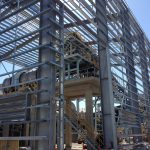